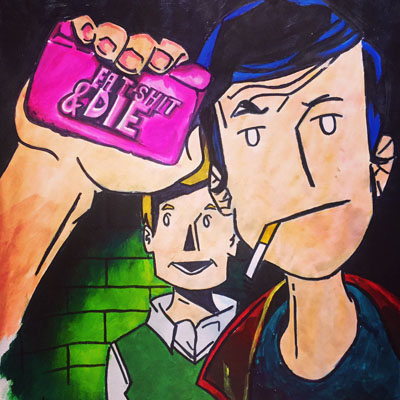 Because Yvonne, an akimbo comics reader, is so awesome I get to make a fan art section!Look at how amazing this picture is! What a cool idea! And it turned out great!

It will still probably crash when reddit shines it’s deathray in our direction, but hey comments are back at least.

Here’s fun pack 3 before it went out.

Here’s a look at Akimbo minis 1 and 2, some fun packs about to go out and some of Akimbo mini 3 in the background. 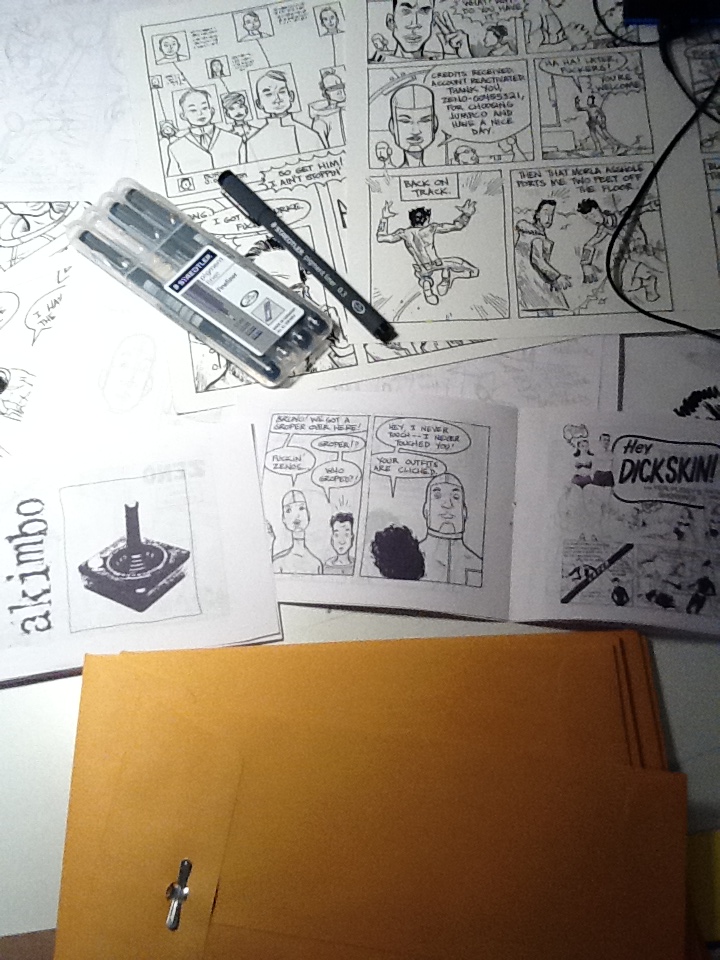 On donations, advertising, and the future of this site

B and I have known each other for nearly a decade and I have been hosting his comics for almost the same amount of time.  When we met we both had shitty  jobs working the meat department of a grocery store.  I knew B could fucking draw, but the stories he told me about trying to get his shit out there were awful.  He would make little comic books by hand and take them to local comic shops and give them away.  He also sent samples of his artwork to publishers in the hopes of getting picked up.  Shit never worked.  He’s too good for them.

At the time, I was a studying computer science at university and told him to put the comics up on the internet instead.  The most successful webcomic I knew about at the time was Penny-Arcade. Because B didn’t, and probably still doesn’t know fuck-all about video games, I ended up writing (terribly), he would make the art, and I would scan and upload everything to my shitty static html website.  And thus Emulsifier-Online was born.  It was going to be awesome, except that it wasn’t.  After 32 comics I ended up getting an internship and left my cushy meat-cutting gig for a $2/hour pay-cut and a shot at learning how to internet.

Fast-forward a couple of years later.  I had graduated, and had sort of been following Akimbo-Comics for a while.  B, not wanting to give up on his dream of reaching out to people through his stories and artwork setup his own website and started uploading his comics.  I’m pretty sure he designed everything in MS word because the site was barely functional.   I told him I’d make him a site, I setup a VPS with a wordpress blog and started downloading everything from the old site and re-uploading it to the new site.  I did most of this without his permission hoping that he would recognize how much better things would be with a proper CMS.  200 some-odd comics and several hours later, the Akimbo Comics site you are familiar with was born, and has continued to exist in in pretty much the same state for the past 4+years.

Early on, readership wasn’t much but I believed in this shit (and loved reading it too) so I keep the servers up, and B, with the exception of the summer of comics, would upload a comic every month or two.

We had advertising for a brief period of time before I decided it wasn’t worth the effort when we were pulling in only about 15 visits per day.  There was also a cafepress store that sold a cheaply-printed book that didn’t even have a real ISBN number (I still have the only copy ever sold, it might become a fun club prize), some t-shirts, and some mugs.  To the 2 of you who bought t-shirts and may be reading this, thank you.   I briefly thought the shirt I bought might make a cool prize, but I don’t know how someone would feel about a vintage akimbo T that has been worn by a 225lb dude at least 50 times.

Don’t worry, I have a point.   The question I want to find the answer to is “Where is this site going?”  Over the past several years I have been maintaining it, but the older I get the less and less free time I have to work on projects like this.  I’ve gotten married and recently my wife gave birth, both of whom (rightfully) demand a lot of my time.   I recently moved into a new place that requires a non-small amount of work to maintain, and because of the housing market I am renting my old place and dealing with all of the bullshit that goes along with that (including making less money than the mortgage and just eating the loss). I also work a full-time job for money dollars running a much larger website, on which I was lucky enough to get to build an iPhone and Android app.  There is a good chance that some of you reading this have used the fruits of my day job.

Without going in to too many personal details about his life, most of you probably know by now that B is in med-school studying for exams and trying to put out comics as much as he possibly can.  I’ll let him fill in his own details if he wants, but he has a family of his own and probably a busier schedule than even mine.

Neither of us have a whole lot of time to put into the site, but both of us also believe that it can be bigger than it is.  We want to put out a book, sell t-shirts, stickers, etc. and get the site to a point where it at least pays for itself.  B also has taken on some (a lot of) student-loan debt, and I’m sure he could use a few extra bucks.  He’s not a doctor yet.

So what I am trying to figure out here is how should this site exist.  Is it worth putting in the extra time to make this sort of thing happen?  This means that hours are going to be taken away from our families as we work on implementing the sort of things you guys have been asking us to do for years.  I know I have gotten into a few arguments with my wife over the last few years about time spent on this site instead of spent on “more important” things, and B probably has too.

So this is what I am doing, there is a small advertising banner on the site now from project wonderful.  The hope is that Project Wonderful will cover the hosting costs.  For those of you who don’t like the ads, you are welcome to install adblock although, we sort of hope you don’t, or at least white-list us.  In addition to that, there is a new fun club/donation page above.  We will be adding stuff to this page if there is enough interest.  Maybe a donation comic?  I’m not sure how exactly that would work.  With the irregular updates, every update would be like a donation comic.  Maybe that’s what they are.

On the subject of the book.  Would anyone be interested in a kickstarter project to get something like this going?  If any of you have experience publishing, please let me know what your thoughts are.  A limited run of a book would probably cost a fair amount, and I can’t justify the expense when I’m unsure of the demand.  The same goes with Prints of comics.  I have been researching how to make this happen with the magic of the internet, but it’s all very time consuming to setup, and like I said I don’t want to spend the time working on something nobody cares about.

I have a few more ideas as well, but please post your own if you don’t mind.  I’d love to know what everyone else thinks about the site and where to take it.  I am hoping that for most of you the new ad-banner isn’t too obnoxious.  I chose the smallest one  I felt would be enough to pay for the site.  The feedback we get here will help us decide what to do next.

Hey guys, so here is the news. I have been noticing some extremely unusual traffic patterns and disk i/o access lately that has not been the result of increased traffic. Because of recent news about apache and wordpress exploits, and also because the server was running an extremely old version of wordpress 2, I have decided to be cautious about this and rebuilt the entire server with updated packages and the latest version of wordpress 3 which is now easily upgradeable.

You have probably noticed by now that the site doesn’t look like it used to. I am working to fix that, but there will still probably be some permanent changes as a result of the way the newer comicpress plugins and themes work. Before we were running a slightly customized version of comicpress + inkblot. For now, and until I can find time to make changes to the theme (css and php) we are going to be on the stock theme. I am hoping to be able to get that done this Sunday, but I have a lot of stuff going on at home so I may not have time.

If you notice anything unusual (broken images in particular) please add a comment to this post so I can look into it.

Also, Brian if you are reading this and just now finding out the news, check your damn email. I told you about this a few weeks ago. Oh, and good luck with the exams.